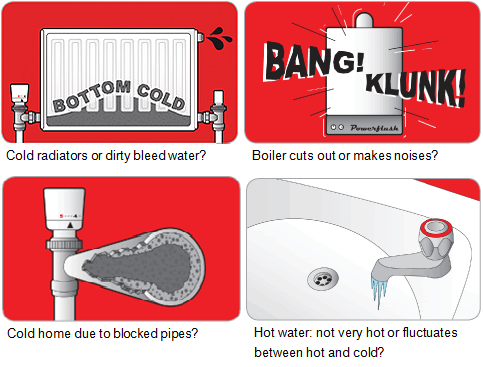 Residents of Southampton… Do you like you home warm and toasty? Do you like your central heating system to work when you need it and work well? Then Powerflush may be the thing you need!

What is a Powerflush?

A powerflush uses acid based chemicals to get rid of sludge that has built up in the pipes as well as eradicating rust that may have built up over the years. An engineer use chemicals to descale the pipes within your central heating system and stop further corrosion. Once the powerflush has been completed there will be no acid left in the system.

Why do I need a powerflush?

There are a number of things that will tell you if a powerflush is needed such as too much noise or banging from your boiler, dirty water when bleeding radiators, cold areas in your radiators (these are usually in the middle or at the top/bottom of the radiators) your heating system taking a long time to warm up. You may also notice your tap water  appearing cloudy which is due to a build-up of limescale.

A common question our Southampton engineers are asked is… “My engineer has recommended a powerflush but I’m having a new system. Why do I need it?” Our engineer has this to say…

“PowerFlush is amazing! I would always endorse a powerflush when a customer is planning on connecting a new boiler to an old system as the new condensing boilers can become easily damaged by fragments already in the heating system.”

How much is a powerflush going to cost?

A complete central heating flush will range between £350 and £1200 however the price will differ depending on the size of the system and the location the work is being done. The chemicals used during the descaling process aren’t usually included in the price and will need paying on top of the quoted price. It’s worth checking what your quote covers before book your flush.

How long is a powerflush going to take?

Powerflushing a complete central system will typically take six hours however older or more damaged systems may take more time whereas younger systems may be finished quicker than this.

To protect yourself and your family, make sure your heating engineer is gas certified before they work on your heating. Use the link to find Gas safe engineers in Southampton.